LondonBlinds4U is a specialist in both blinds and window shutters, supplying and fitting them to homes throughout London. However, a lot of our customers don’t know much about shutters, so we’ve put together this guide to shutters to help you understand what they are, their advantages and whether they might work in your home! 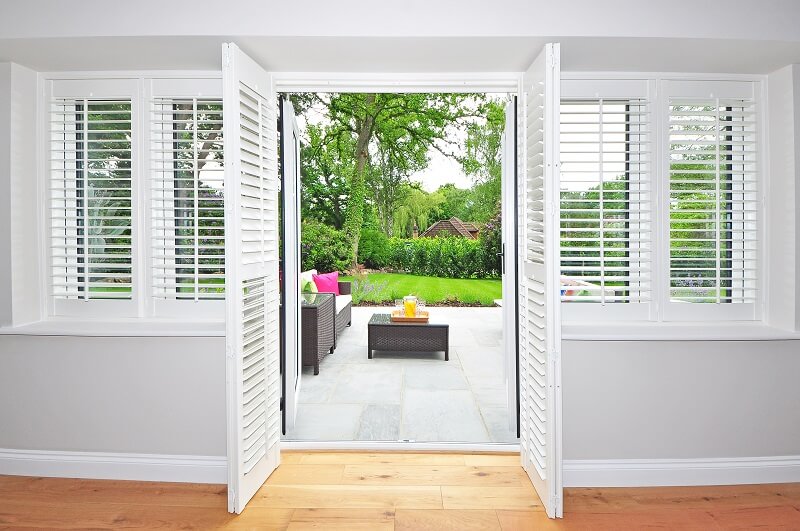 A window shutter is a pair of wooden panels with horizontal slats (or louvres) that are fixed to the window to control privacy, light and enhance security. The louvres are built into the frames, but they can be adjusted to change the light levels in a room, and the whole shutter can also be opened.

Shutters are usually, and traditionally, made of wood, but there are options for water resistant versions so they can be used in bathrooms or kitchens where there’s a risk of splashing!

You can get both exterior and interior shutters. This describes where on the window the shutter is fixed, the outside (exterior) or the inside (interior).

Interior window shutters are the best choice for homes in London and Britain for multiple reasons. They are protected against the British weather and therefore last much longer without needing much maintenance. Interior shutters also give complete control over the light and privacy levels in your home and are much more versatile than exterior options.

Are Shutters and Plantation Shutters the Same?

You might have heard shutters being called ‘plantation shutters’. Traditionally, these described a shutter with a wider louvre, but now is used to describe any type of shutter.

They got their name from the plantations in Southern American states that grew tobacco, sugar, cotton, coffee and other produce. These Southern states had very hot and humid climates in the summertime, known as ‘subtropical’ climates. It meant that the traditional window covering of curtains would be far too stifling and make homes too hot to be in! 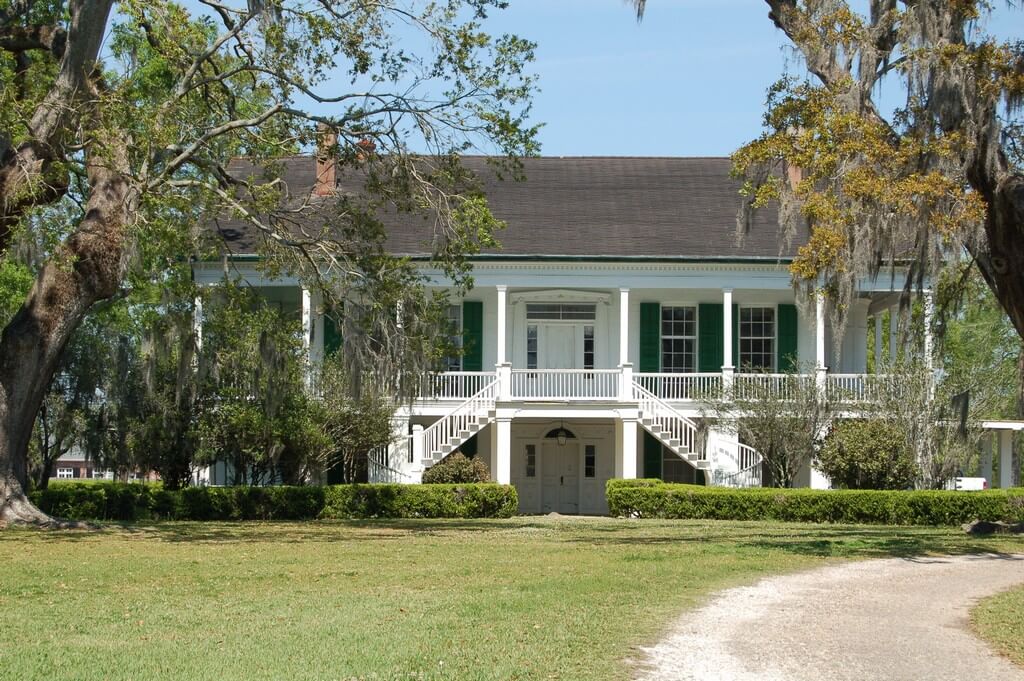 Wooden shutters were developed as an alternative. They were traditionally white in colour to reflect the heat from the sun and used very large slats. These could be opened (while the shutter as a whole stayed closed) to allow air to flow through the house — and their large size improved the level of air flow.

Plantation shutters became so popular for their practicality and aesthetic that they began to be used outside of the Southern states of America and are now hugely popular around the world.

Today, you’ll hear shutters being called ‘window shutters’ and ‘plantation shutters’ — but they both refer to the same thing. They’ve seen a big increase in popularity over the last few years with loads of people choosing them for their homes.

Shutters have a number of advantages over other window coverings, which include:

Most styles of blinds are either open or closed, which means that you can have either lots of light or lots of privacy. While there are blinds that allow you to balance light and privacy — such as venetian or vertical blinds where the angle of the slats can be changed while the blind remains closed — shutters really do the best job.

They are made up of solid frames that can be completely opened to expose the whole window, but within the frames there are also slats, or louvres. Like with venetian blinds, while the shutter is closed the louvres can be opened and closed to control the levels of light. You can let in a lot of light while ensuring you still have privacy. 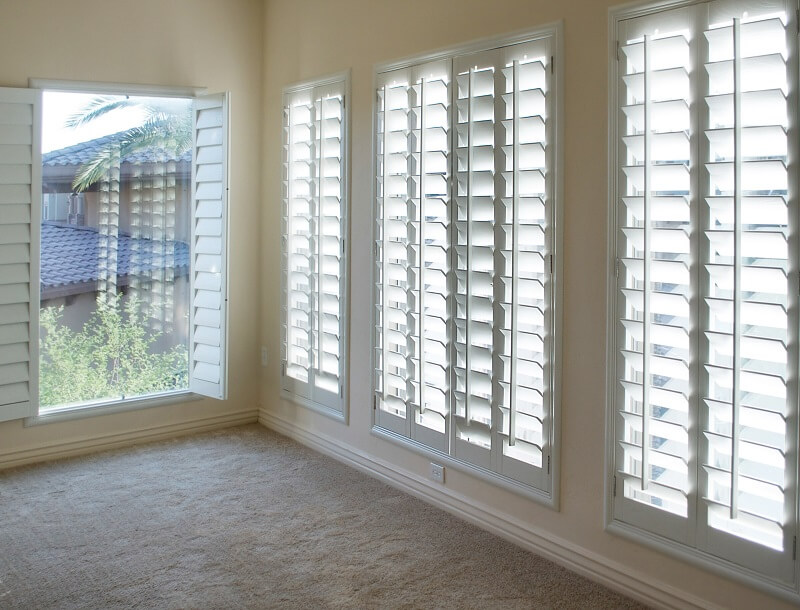 If you have windows that aren’t simple rectangles, you might find it hard to get a blind that can cover the whole window. Shutters, on the other hand, are made to measure and can be designed to perfectly fit circular, triangular or whatever other shaped windows you have!

Blinds and curtains don’t do anything to help with security, but shutters do. Made from wood, they are extremely sturdy and are fitted into the window frame. They therefore form an extra layer of security over the window. Many shutters can also be locked, which would create a double lock system to keep your home safe.

While blinds do provide a level of heat insulation, and a little sound insulation, shutters are more effective. Balancing heat was one of the primary reasons that shutters were invented back in the Southern American states, so they are fantastic at insulation and heat control.

They are made from much more solid material than fabric blinds. It’s therefore harder for heat to conduct through the material from outside or in. You lose less heat in the winter and prevent too much heat entering your home in the summer, helping to keep it cool. Plantation shutters were also traditionally painted white, which helps to reflect UV and heat radiation (both outside and in) to better insulate the home.

Because the wooden material is very solid, they also provide much more effective sound insulation than blinds do.

Fabric window coverings can attract dust and aren’t necessarily very easy to clean. Because shutters are made from wood, they are easier to wipe down and therefore are often a better choice for people with allergies.

The way shutters look is one of the most common reasons that people choose to have them in their home. They can be used to create a huge range of different interior styles from rustic through to modern, catering for every taste.

Shutters also come in a range of different varieties to suit your requirements. The most common is full height shutters, but we also have tier or tier and cafe style shutters available.

Full height shutters are your traditional form of shutter. They fit the whole length of your window, although there are additional variations on full height shutters. A mid-rail can be added to very tall or large windows to strengthen the shutter halfway up.

Tier on tier is a set of two shutters. One set covers the lower half of your window and one set the upper half. This increases the amount of control you have over light and privacy. You could open the upper half of the shutters while leaving the bottom ones closed.

Rather than covering the whole window, café style shutters are fitted part way up a window (usually half way). It means that they let lots of light into a room beneath the shutter while still maintaining privacy in the top half of the window. As the name suggests, they are most common in cafés and restaurants, but they also work well in different home environments.

While traditional shutters open and close on a hinge, in the same movement as a door, you can also get shutters that slide up and fold, concertina style. These are ideal for full length doors, like patio and French doors, as they can be easily pushed out of the way on the tracked system.

If you’re looking for window shutters in London, then choose LondonBlinds4U. We are leading experts in supplying and fitting made to measure shutters so can ensure your home looks fantastic!